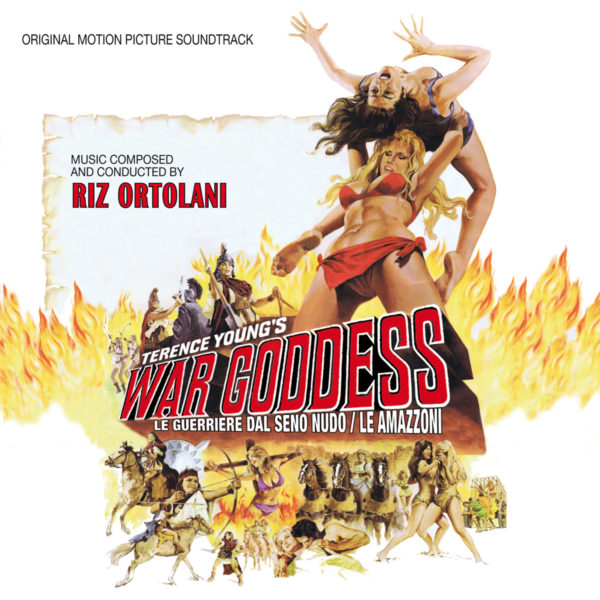 Although he is still best known as the director of three of the first four James Bond pictures, Terence Young’s career contains its fair share of odd titles, including this Italian historic film which was made a decade after the golden age of the pepla. Starring Alena Johnston, Sabine Sun, Malisa Longo and Luciana Paluzzi, War Goddess is a campy picture about the life of amazons who are forced to mate with men in order to keep their tribe alive – unfortunately the new Queen is starting to fell for his intended mate with tragic consequences.

Previous releases of this Riz Ortolani’s score contained precious little of the actual film tracks which make their debut here. The first 10 tracks is the program of the original LP from Cinedisc, issued only in Japan (and partially reissued on CD by Point Records in 1995), while tracks 11-22 contain the actual takes used in the film. The score’s central theme is a playful march for the amazons, followed by several beautiful romantic set pieces for the relationship of Queen Antiope and Prince Theseus. The program also contains a huge battle track and haunting suspense material for the tribe’s dark rituals.

This release mastered by Claudio Fuiano, includes a 16-page color booklet with liner notes by Gergely Hubai, discussing the director, the composer, the score and the special role of Le Amazzoni within Italian cinema.