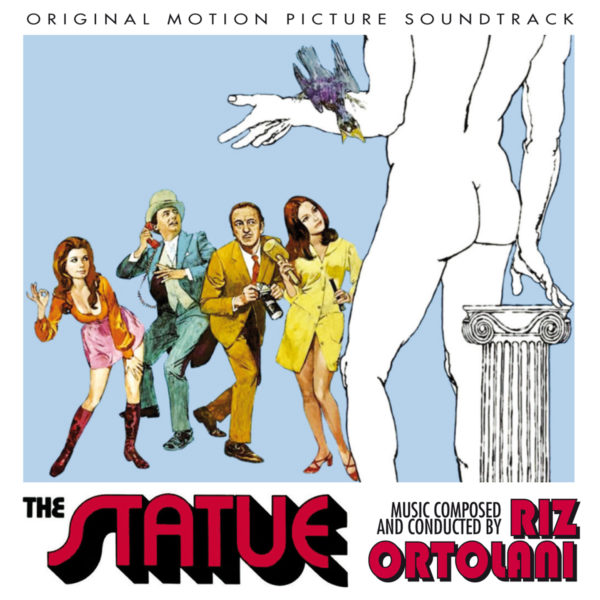 Based on the play of Australian playwright Alex Coppel, The Statue tells the story of Alex Bolt (Niven), a British linguist whose development of a universal language makes him an international sensation and the recipient of a Nobel prize. Ambitious diplomat Roy Whiteley commissions Bolt’s wife to sculpt a statue of her husband which can be erected at a London square, but the 18-foot nude of the linguist poses a special challenge…

The score of The Statue is a breezy affair spearheaded by its title song “Charlie” whose instrumental version opens the CD. The insane globetrotting affair is augmented by similarly colorful cues, making this score Riz Ortolani’s It’s a Mad, Mad, Mad, Mad World . Highlights include Alex’s futile attempts at taking a few photos during a boat trip (Seq. 4) and the Zorba-inspired sirtaki cue for our hero’s trip to the Meteora monasteries in Greece (Seq. 7).

This albums marks the first ever release of this short but catchy score, containing the album mock-up prepared by Maestro Ortolani himself in 1971, but it had finally never released. Mastered by Claudio Fuiano from the stereo album tapes, courtesy of The Riz Ortolani Estate, with a pristine sound. The 8-page full color booklet features liner notes by Gergely Hubai discussing the film and the score.