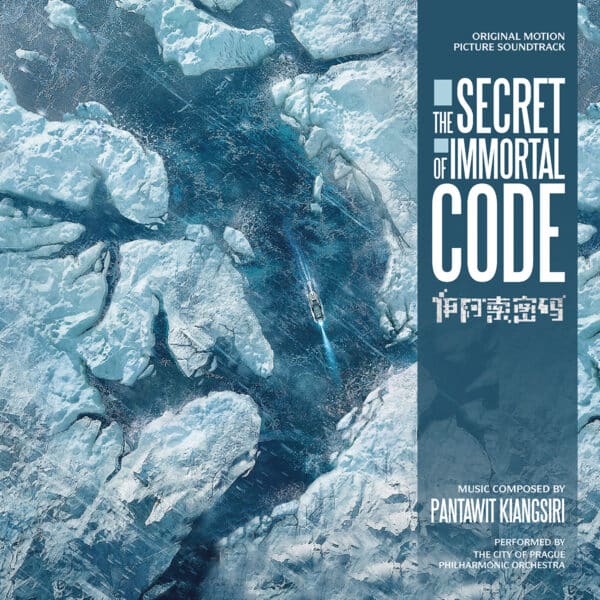 The Secret of Immortal Code

Quartet Records, in collaboration with MovieScore Media, releases the score from the Chinese science-fiction movie THE SECRET OF IMMORTAL CODE, written by emerging Thai composer Pantawit Kiangsiri. Directed by Wei Li and Nan Zhang and stylishly shot in black and white, the film takes place in a dystopian future where the world’s population has become sick. To save her dying sister, Ziqi Lin (Jing Liang) embarks on a journey to the Arctic to seek her last hope, with guidance and help from a pharmaceutical tycoon, Dr. Yao (Lixin Zhao). Unknown to Ziqi is that the journey of hope is actually part of a dangerous conspiracy that threatens everyone’s life.

Performed by The City of Prague Philharmonic Orchestra, the score is a love letter to many maestros of our common sci-fi past, particularly Jerry Goldsmith. “After producer Wang Donghui explained his vision to revolutionize Chinese science fiction with THE SECRET OF IMMORTAL CODE, I immediately knew it was a chance to fulfill my childhood musical dreams,” says the composer. “I wanted to create something excitingly new but at the same time pay musical tribute to my favorite sci-fi film scores of the past. In the orchestral part, I paid homage to my composer heroes such as Jerry Goldsmith, John Williams, James Horner and Christopher Young. As for something new, large chunks of the music were scored by using only double bass, with soloist Ryan Baird coming up with a variety of strange sounds that can be produced by this instrument acoustically.”

Pantawit Kiangsiri is a composer from Thailand who has written for films, television, video games and the concert hall. After scoring over two dozen shorts, his score for THE SECRET OF IMMORTAL CODE marks his first major genre release in theatres. His other credits include writing music for Warner Brothers, Netflix, Digital Domain, Sony and Vevo. Kiangsiri graduated from the Scoring for Motion Pictures and Television Program at USC, having studied with Bruce Broughton and Christopher Young.