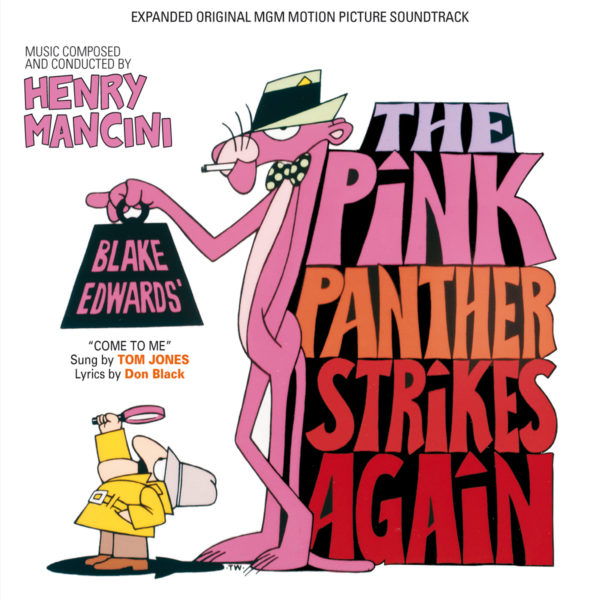 Quartet Records and M.G.M. present the complete edition of Henry Mancini’s score for the fourth movie in the hilarious and famous Pink Panther saga, directed by Blake Edwards, with Peter Sellers as the clumsy Inspector Clouseau.

The Pink Panther Strikes Again is considered by many to be the funniest film of the series. Spectacle proved to be key for the film as United Artists gave it the international action flair afforded to their James Bond franchise. While Clouseau was as far from an employee of Her Majesty’s Secret Service as one could imagine, Edwards and his co-writer, Frank Waldman, gave their script a knowing spin on that popular series’ tropes. A now-insane ex-Chief Inspector Dreyfus (of course driven to distraction by Clouseau) takes up lodging at a henchman-filled castle, wherein he kidnaps a brilliant scientist and his daughter to build a gigantic matter-evaporating laser.

Although Strikes Again is far from the brilliant comedic glamour of the first Pink Panther movie – and from the still-charming The Return of the Pink Panther – there is no doubt that Mancini wrote here his best score for the series. The composer provides an impressive catalogue of the franchise’s quintessential style, including a memorable tune dedicated to Inspector Clouseau, German polkas and waltzes, French tangos, sophisticated suspense music (descended from the sound of other scores by the composer, such as Charade and Wait Until Dark) and action cues. Mancini also composed two lovely, original songs with lyrics by Don Black – one of them (“Come to Me”) is performed by Tom Jones with a vocal cameo by Peter Sellers. The “Main Title” sequence offers a new version of the Pink Panther Theme, interspersed with stunning arrangements by Mancini from such famous themes as Neal Hefti’s Batman, The Sound of Music, Singing in the Rain or Sweet Charity.

Music from The Pink Panther Strikes Again was released on LP in 1976 with 12 tracks, and reissued on CD in 2008 by Ryko with five bonus tracks, although the bonus material was in poor-sounding mono. But there was still much important material from this score to be released. For this complete edition, we have remixed the entire score from the 16-track masters recorded at C.T.S. Studios in London by John Richards, with amazingly clear and crystalline sound. As a result,  we’re able to offer this new version in full stereo –and can say that it sounds like it was recorded yesterday!