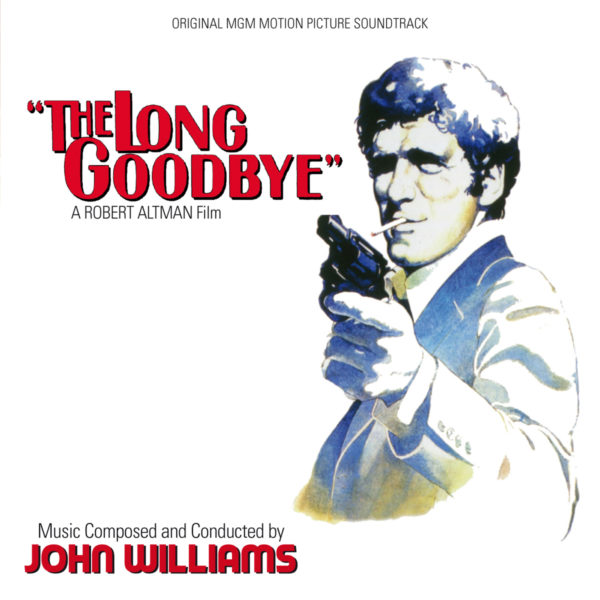 This film represents the second score by John Williams for a film by Robert Altman; it was preceded by Images (1972) and some episodes of the TV series “Kraft Suspense Theatre” in the early sixties.

For this revision of the Philip Marlowe character, Altman asked Williams to provide a most unusual score: one single theme repeated throughout the film with many variations adapted for various scenes. The tune, one of Williams’ most inspired from the seventies, is presented as a song (lyrics by Johnny Mercer), with vocals by Jack Sheldon and Clydie King. Williams also presents the theme in different jazz versions (with the Dave Grusin Trio), as a tango, in blues style (“Night Talk”), as a warm love theme for trumpet and strings, on sitar (for the hippie party), or in Mexican variations for the last part of the film (“Mariachi,” “Guitar Nostalgia”). Williams arranged and personally supervised the different versions, in addition to adapting the song as underscore (“The Border, “Marlowe in Mexico, “The Mexican Funeral” and “Finale”). The lengthy 10-minute “Main Title” sequence deserves special mention as an example of how Williams developed his tune.

No album of The Long Goodbye was released at the time of the film, nor was the single with the Jack Sheldon and Dave Grusin versions prepared by United Artists Records. With the passing of time, the tapes for many United Artists films of that period have been lost, but some years ago part of the score (about 23 minutes) was released by Varèse Sarabande in a limited edition CD that quickly sold out. To assemble this album we had to do some detective work, but that has been possible thanks to the efforts of MGM. In their vaults they found (in addition to the tape containing the versions included in the previous Varèse edition), two tapes containing new versions: an alternate of Dave Grusin, a jazz piano version featuring Williams himself, and some takes from the underscore. To complete the underscore assembly we used two different 35 mm. magnetic music stems in mono with acceptable sound quality. Finally, a trio of bonus tracks (found on the tapes) concludes the album: a fascinating and fun vocal in which singer Clydie King ad-libs while getting her voice into the song’s vibe, a rehearsal of the beach house party chorus with Jack Riley and Clydie King singing with the crowd, and a rehearsal of the solo violin for “Tango Version.”

So here, finally, is the original concept of John Williams for The Long Goodbye, as conceived by Robert Altman. Because of the many repetitions of the tune and the different sources from which the cues are drawn, this album is not presented in film order, but arranged for pleasant home listening.