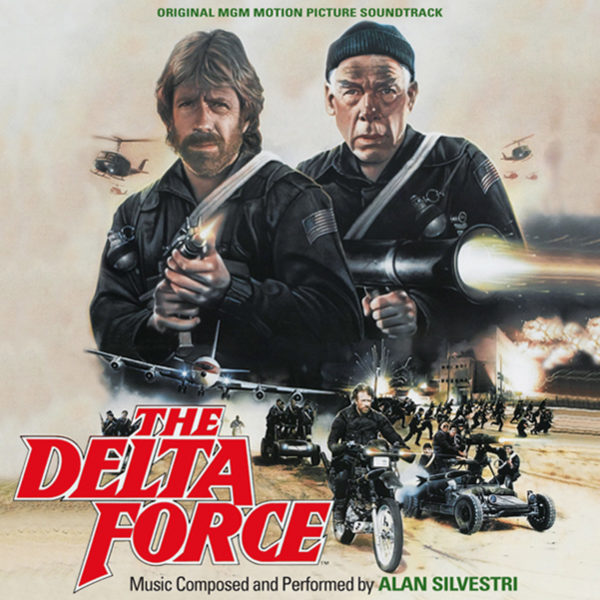 Based on the real life terrorist plot of the hijacked TWA Flight 847, The Delta Force (1986) by The Cannon Group is one of the most successful and memorable mission movies from the 1980s. Starring Lee Marvin and Chuck Norris as the leaders of several hostage rescue attempts that eventually climax in a memorable rundown showdown in the Middle East, Menahem Golan’s action vehicle turned out to be a major success that spanned two sequels and one memorable soundtrack.

Alan Silvestri was the composer for The Delta Force fresh off his successful Back to the Future score – although the two scores couldn’t be further apart. While Zemeckis’ movie demanded an epic orchestral accompaniment, The Delta Force is fully electronic and was realized with the Synclavier system. Even though it has no live instruments in it, Silvestri’s music spans one of the most epic and patriotic marches from the 1980s in addition to creepy textures for the terrorists and even some sympathetic character-building moments.

Originally released by Milan on LP and CD, the first release of The Delta Force was notorious because the CD omitted an important track from the LP program (“The Rescue”). The first complete edition of the score was released by Intrada in 2008, but their limited edition of 1000 copies was sold out in a four hours!. Our two-disc release contains same Intrada’s extended program on Disc 1, while Disc 2 contains the original Milan LP with a carefully selected programed by Silvestri himself – including the track that was previously unreleased on CD. The 12-page liner notes by Gergely Hubai discuss the film, the score and give a track-by-track breakdown with explanation on the differences between the two programs.

DISC ONE: THE COMPLETE FILM SCORE