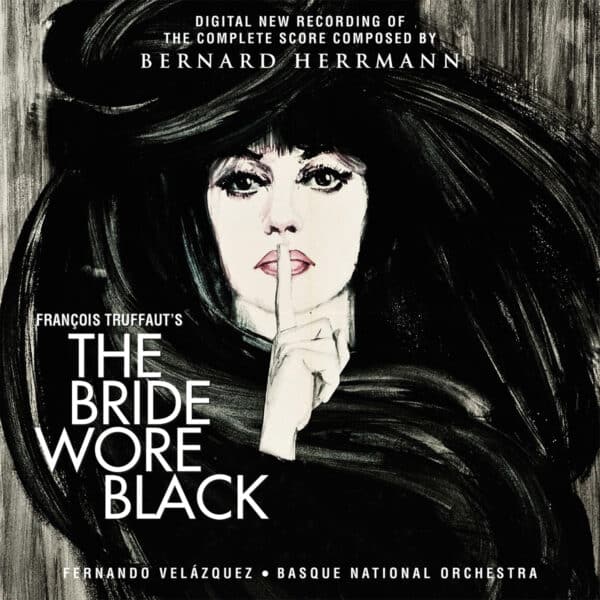 Bernard Herrmann’s The Bride Wore Black, the second of his two collaborations with François Truffaut (Fahrenheit 451 was the first), has been eagerly sought after by collectors and film music fans around the world for many years. Despite the efforts of several specialized labels, including us, the search for the complete original elements has been unsuccessful. The orchestral sessions conducted by André Girard and Herrmann himself in Paris in 1968 are either destroyed or lost. So how can we recover this music, a prime score from Herrmann’s last years? The only solution was to record it again and bring this music back to life in state-of-the-art digital sound.

After two albums with Fernando Velázquez and the Basque National Orchestra (“Concert Suites” and the complete recording of The Orphanage), this seemed like a perfect project for them. The young composer/conductor and the orchestra enthusiastically and unhesitatingly embraced the idea. With access to Herrmann’s original, fully orchestrated score, painstakingly reconstructed by Rubén Villar, we were able to restore the score respecting every note the composer had written. We were thrilled to discover a lot of music not used in the final edit of the film: from the 35 minutes of score heard in the film, we have now more than 50!

Passionately conducted by Maestro Velázquez, this new complete recording of The Bride Wore Black reveals unexpected aspects of Herrmann’s second collaboration with Truffaut. The original narrative construction of the score, as intended by Herrmann, is unusually rich in themes and sync points. Its form hews closer to more traditional “Hollywood style” structures than most of the thrillers he had previously scored. The emotional and subliminal information are clearly and sharply contrasted. It also marks a transition in the composer’s career: from such a lightly colored Hitchcock score as The Trouble With Harry (obvious in M. Coral’s jolly theme) to the forthcoming dark and passionately romantic approach to his penultimate masterwork (one might say his own premonitory requiem…), Obsession. Beyond their presumed Hitchcock homages, the films of François Truffaut and Brian De Palma have a lot in common: churches, reception waltzes, portraits, close-ups on guns, airport scenes and powerful lengthy tour-de-force sequences enhanced by Herrmann’s unleashed orchestral genius … and, not to forget, organ!

Recorded on the OSE orchestra stage in September 2018 by Marc Blanes (who also mixed and mastered), the album was produced by Jose M. Benitez and Edouard Dubois, with executive production entirely by Quartet Records. The booklet includes extensive liner notes by Frank K. DeWald, who discusses both film and score as well as providing a track-by-track analysis. After several years on our wish list, this dream project has finally come true.