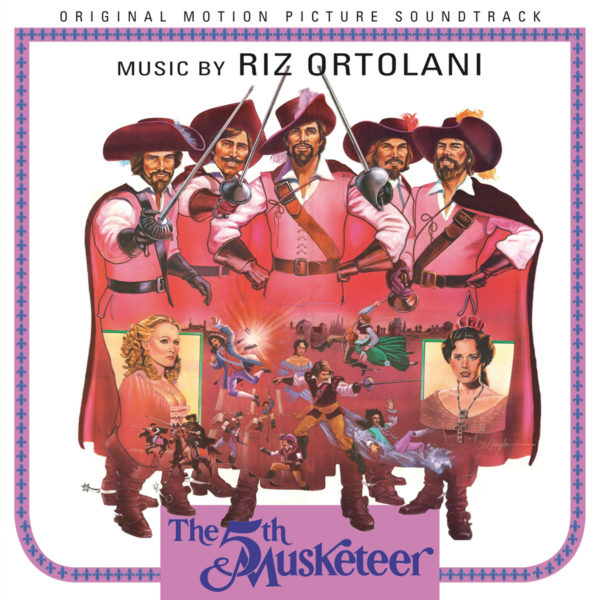 Though the title may indicate The Fifth Musketeer is related to the popular musketeer films directed by Richard Lester in the 1970s, Ken Annakin’s movie is actually an adaptation of “The Man in the Iron Mask.” Playing dual roles as King Louis XIV and his forgotten twin brother, Beau Bridges is aided by his father, Lloyd Bridges, José Ferrer, Cornel Wilde and Alan Hale Jr. Bond babe Ursula Andress and “Emmanuelle” herself, Sylvia Kristel, lend European sex appeal to the story—perhaps a bit too much as the film lost 14 minutes in its tamer, American cut.

Riz Ortolani had previously worked together with director Ken Annakin on the Rachel Welch vehicle The Biggest Bundle of Them All (1968) and brought the same level of energy to the passionate retelling of “The Man in the Iron Mask.”  The music features a thunderous adventure theme as well as clever jazz stingers and court music in an ingenious blend of deliberately anachronistic underscoring. And even if you’ve seen the film, quite a bit of the music will sound brand new as several cues were dialed down in the film, so the CD is the only way to get the full score.

While an original soundtrack was planned for the film, it was never released—until now. The new CD presents the original album master as assembled by the composer, plus bonus material—together totaling over an hour in length, all mastered by Claudio Fuiano from first-generation master tapes. Eight-page full-color booklet includes liner notes by Gergely Hubai that discuss the film, the composer and the score.