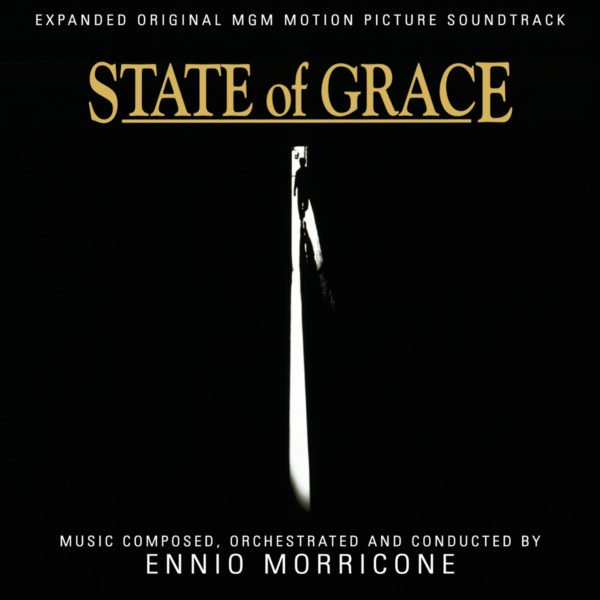 Quartet Records, in collaboration with Universal Music Group and Metro-Goldwyn-Mayer, is glad to present the premiere release of the complete score composed, orchestrated and conducted by Ennio Morricone for State of Grace, the 1990 cult mafia-drama film directed by Phil Joanou, starring Sean Penn, Gary Oldman, Robin Wright, Ed Harris, John Turturro, John C. Really, Burgess Meredith and Joe Vitarelli. The legendary Morricone won an Oscar for The Hateful Eight and has composed many other outstanding scores, including The Good, the Bad and the Ugly, Sacco and Vanzetti, Days of Heaven, Cinema Paradiso, Malena, En mais fais ce qu’il te plait and many others.

State of Grace is about Terry Noonan (Penn), who returns home to New York’s Hell’s Kitchen after a ten-year absence. He soon hooks up with childhood pal Jackie (Oldman), who is involved in the Irish mob run by his brother Frankie (Harris). Terry also rekindles an old flame with Jackie’s sister Kathleen (Wright). Soon, however, Terry is torn between his loyalty to his friends and his loyalties to others.

Ennio Morricone offers one of his best efforts for a Hollywood film, with an unforgettable main theme, a beautiful love theme, tension cues, dramatic, violent music that is also sometimes epic. The score is mainly dark and fatalistic, in a style that the Italian maestro would continue one year later in his Oscar-nominated score for Bugsy.

The soundtrack album of State of Grace released on compact disc by MCA in 1990 was quickly out of print. The album, remixed and edited by Morricone and his sound engineer Sergio Marcotulli for listening purposes, omitted several important passages, in addition to some cues that were not used in the final cut. More importantly, the mix made for the film was completely different from that of the album, with a positioning of the orchestra that offered a different perspective of the score. This expanded release has been newly mixed and mastered by Mike Matessino from the 3-track masters preserved in mint condition in the MGM vaults. On CD 2 we have included the hard-to-find MCA album prepared by the composer, freshly remastered—and it has never sounded better.

The package includes a 16-page full-color booklet with liner notes by Tim Greiving, discussing both film and score and featuring quotes from director Phil Joanou.

DISC ONE. The Complete Film Score