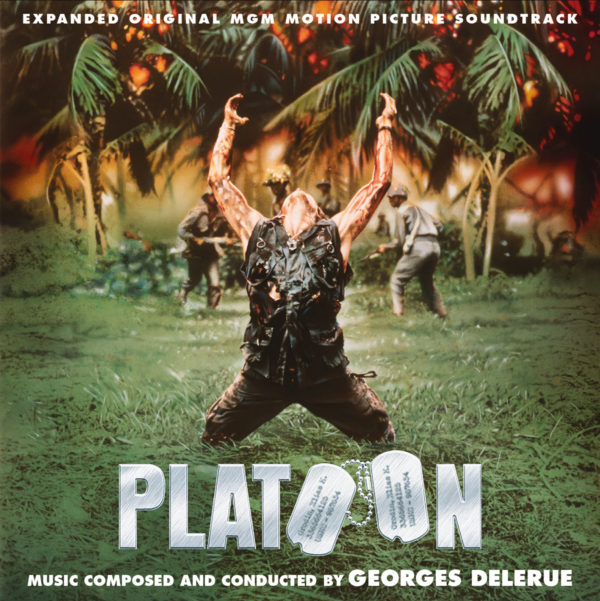 This raw but sensitive vision of war and innocence was awarded four Oscars in 1987, including Best Picture and Best Director, and was the springboard for many young actors who were just beginning their careers and became some of the brightest stars of their generation: Tom Berenger, Willem Dafoe, Charlie Sheen, Johnny Depp and Forest Whitaker, among others.

Director and composer had already worked together on the excellent Salvador one year before, and here they repeated their collaboration. Stone wanted from Delerue a bittersweet sound that would contrast with the terrible images of death and chaos; he had used the famous “Adagio for Strings” by Samuel Barber as a temp-track. Delerue wrote a radical, beautiful score modelled on and inspired by the Barber, but in the end, Stone decided not to use a large part of it, using instead the Barber, adapted and conducted by Delerue.

The album released in 1987 was a compilation of songs from the period, with a couple of short cues by Delerue and his adaptation of the “Adagio” that included sound effects and dialogue. Some years later, the Prometheus label released a CD containing the short Salvador score and a 25-minute selection from Platoon. Now we are proud to present Delerue’s score, recorded with the Vancouver Symphony Orchestra, in its entirety, including unused cues, alternates and album versions. Produced by Neil S. Bulk and mastered by Doug Schwartz from the original two-track stereo session tapes (courtesy of MGM), this special release is limited to 1000 units and features exclusive, in-depth liner notes by writer Tim Greiving, who discusses both film and score and incorporates several interesting quotes from Oliver Stone.