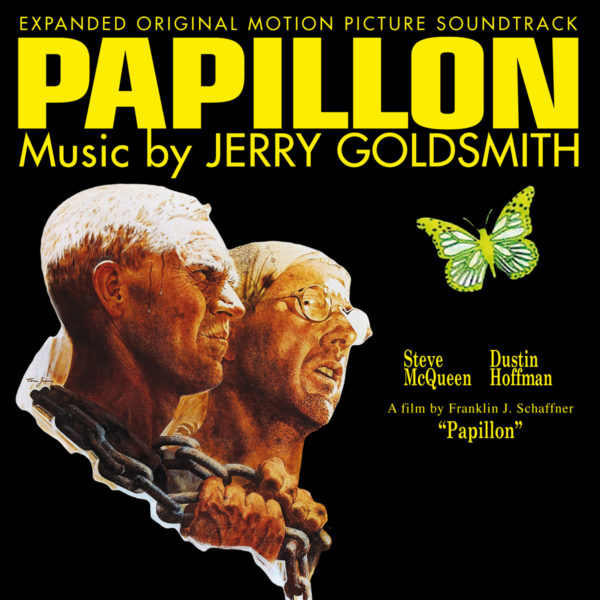 The bestselling autobiography of Henri Charrière, one of the few people to successfully escape from the notorious French penal colony of Devil’s Island, served as the basis for Papillon. Steve McQueen plays the pugnacious Charrière (known as “Papillon” because of a prominent tattoo), incarcerated—wrongly, he claims—for murdering a pimp. He saves the life of fellow convict Louis Dega (Dustin Hoffman), a counterfeiter who will later show his gratitude by helping Charrière in his many escape attempts, and by smuggling food to Charrière when the latter is put in solitary confinement.

Papillon was an expensive French production by Robert Dorfman, with financial support from some American studios. When Schafner entered the project, he wanted to score the film with his favorite composer, Jerry Goldsmith, with whom he had already made three films (including the classics Planet of the Apes and Patton) After Papillon, Goldsmith had the opportunity to compose another three magnificent scores for Schafner (Islands in the Stream, The Boys From Brazil and Lionheart).

The sublime Academy Award-nominated score of Papillon is among the best and most celebrated of Goldsmith’s scores, and one of his personal favorites. It features a memorable main theme (a “Montmartre-like tune”), Impressionistic passages à la Debussy, intense and dramatic music, all colorfully orchestrated by Arthur Morton.

This new release has been carefully remixed and mastered by Mike Matessino from the recently discovered multi-tracks masters of the complete sessions, recorded in Italy and preserved in mint condition. It features every note Goldsmith recorded for the film, including music ultimately not featured in the final cut, extended versions of some cues trimmed during film editing, and alternates. There is also a generous selection of source music specially arranged by Alexander Courage and conducted by Goldsmith (these cues are quite important in the film, since they appear in Papillon’s dreams and in the band concert during the escape).