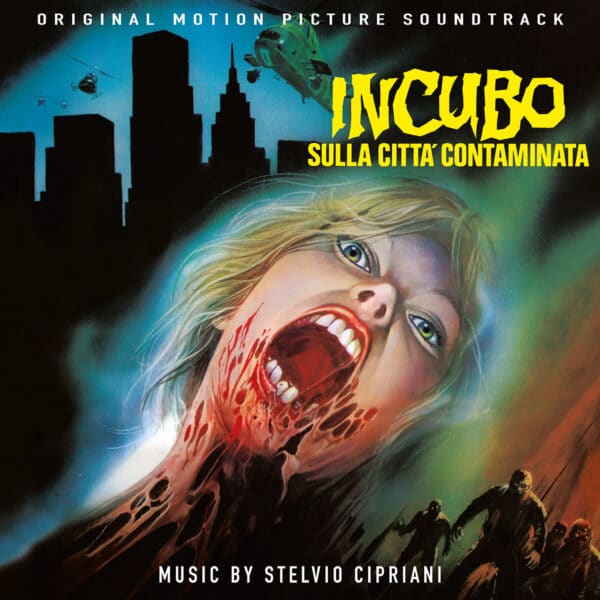 Though Lenzi objected to calling this movie a zombie flick, this Spanish-Italian-Mexican co-production tried to ride the wave of Z-flicks with a new twist. Instead of revived dead, these zombies are the result of radiation poisoning. Ace reporter Dean Miller (played by Hugo Stiglitz) is on the case, but he has to save his wife from a hospital before he can get to the bottom of this mystery and find out what had really caused the zombie epidemic.

Stelvio Cipriani’s iconic score for INCUBO SULLA CITTA’ CONTAMINATA is largely electronic with a few live instruments providing a bit of light-hearted counterpoint to carnage. The music features heart-pumping action cues for the attacks themselves and a restrained solitude theme for the moments of reflection on the anti-nuclear message; even a selection of catchy pop tracks pop up in the mix. These fun bits serve as the perfect counterpoint to the film’s most notorious sequence, a zombie hoard’s attack on a televised aerobics class.

This CD features the same musical contents as the out-of-print complete score released by Digitmovies in 2013 and produced by Claudio Fuiano, but for this Quartet edition the audio has been newly remastered by Chris Malone from the original session tapes. The package features new liner notes by Gergely Hubai discussing the film and the score.