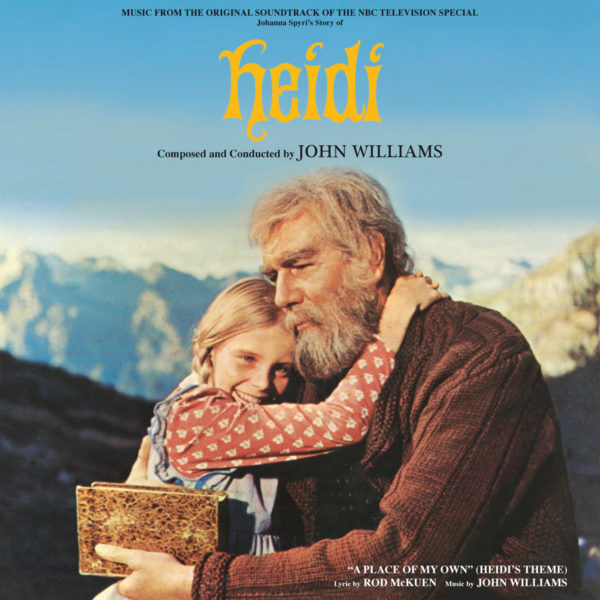 For most of the 1950s and ’60s, Williams (billed as Johnny) was best known for jazz, genre television, and his spirited comedy scores for films like Mann’s 1967 caper Fitzwilly. Heidi was one of the first motion pictures to carry the more formal “John Williams” credit, and represents one of the composer’s earliest opportunities to show what he could do with a large-scale dramatic film. Heidi’s soulful heroine, coupled with the majestic backdrop of the Swiss Alps, led Williams to craft a score of remarkable power and beauty. Anchored by a lyrical main theme, his music showcases many of the elements that would come to define his signature sound: soaring French horns; dynamic counterlines; rich harmonies; and playful, intricate scherzos. The score even features a stunning early example of Williams’ religioso writing, for the film’s inspirational climax. Accordingly, Heidi earned Williams his first Emmy Award, for Outstanding Achievement in Musical Composition.

As Heidi was a joint production with Studio Hamburg, Williams recorded his score in Germany with members of the Hamburg Opera. He later recorded supplemental album tracks at CTS Studios in London (including the song “A Place of My Own,” with lyrics by Rod McKuen). Music from both sessions was combined with narration and released on LP in 1968 by Capitol Records. Until now, none of this material has been authorized for re-release by Capitol or rights-holder EMI. Quartet Records is proud to present the first fully licensed CD of Heidi, presenting all of the material from the original film tracks that is known to survive, adding bonus tracks from the London session, and finishing with the complete narrated album program. The original score has been newly remastered for improved sound, carefully sequenced for ideal listening, and several cues have been restored to their original length (with looped material removed). With a 16-page full-color booklet that includes an essay and detailed cue analysis by film music writer John Takis, this important early John Williams score can now be appreciated and enjoyed like never before.