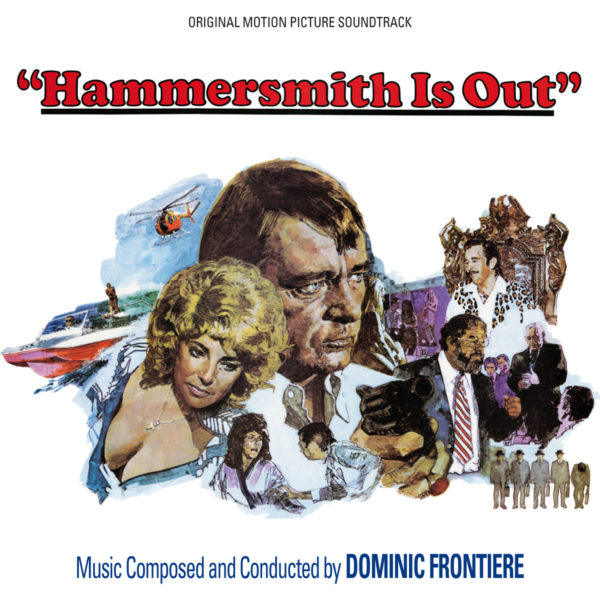 Quartet Records in collaboration with Capitol Records presents the CD premiere of the cult Dominic Frontiere score to the 1972 Richard Burton & Elizabeth Taylor’s Hammersmith Is Out.

Directed by Peter Ustinov, Hammersmith Is Out transplants the famous story of Doctor Faustus into the 1970s where a dimwitted hospital orderly signs a deal with “the devil” in exchange for achieving the American dream within a matter of weeks. According to the contract, Billy Breedlove rescues the enigmatic Hammersmith from an insane asylum so that his new success could mesmerize the beautiful blonde waitress, Jimmie Jean. Things take a turn for the worse as Billy can’t handle the sudden influx of cash while Hammersmith takes an unlikely interest in the waitress accompanying their social rampage…

Despite the distinguished cast that includes Beau Bridges and director Peter Ustinov in addition to Burton and Taylor, this weird little memento from the 1970s is mostly forgotten today. Sill, fans of film scoring will always remember this movie thanks to its fun and addictive score by Dominic Frontiere (The Outer Limits, The Stunt Man, Brannigan). The composer creates a catchy tune for Hammerstein and uses harmonica to represent the folk hero simplicity of the two innocent people caught in his traps. A selection of lively source cues are interspersed with the underscore to provide a brisk listening experience for those who can’t get enough of the 1970s.

The album recreates the program of the original Capitol LP which had most of the music from the film. Detailed liner notes are provided by Gergely Hubai, who discusses the film and the score based on original interviews. The 12-page booklet contains several stills and even a track-by-track rundown of the program.