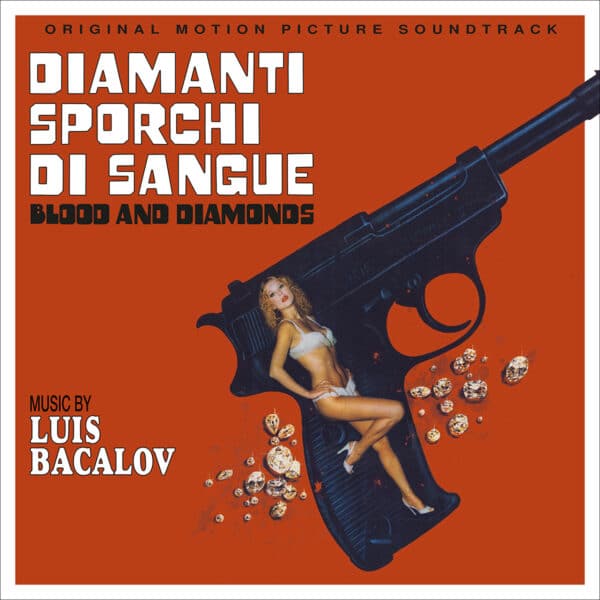 Quartet Records, in collaboration with Cinevox Records, presents the world premiere release of the cult score from 1977 by Luis Bacalov (SUMMERTIME KILLER, DJANGO, IL POSTINO) for Fernando di Leo’s classic polizziesco DIAMANTI SPORCHI DI SANGUE (aka BLOOD AND DIAMOND), which was considered a kind of continuation of his iconic MILANO CALIBRO 9.

Following the bankruptcy of his own production company Duania 70, Fernando di Leo returned to working for other producers with DIAMANTI SPORCHI DI SANGUE, a heist thriller which builds on the director’s knack for cop movies – with an unusual twist around who to trust in this jewelry robbery gone wrong. The film stars Claudio Cassinelli, Martin Balsam and euro-stunner Barbara Bouchet.

Leo’s usual collaborator, Luis Bacalov, composed the music, and this is one of his most important previously unreleased scores. The music often relies on various edits of the action theme “Preludio,” which escalates into a “Dies Irae” conclusion whenever murder is about to happen. Some years later, tracks from the score were utilized in Bruno Mattei’s zombie flick VIRUS (also available from Quartet Records). The music also features heart-pumping action cues, propulsive rhythms and a beautiful dramatic theme.

This is the premiere release of the complete score, whose recently discovered tapes were long thought to be lost. Produced by Claudio Fuiano, mastered by Chris Malone, the 12-page full color booklet includes liner notes by Gergely Hubai discussing the movie and the score.