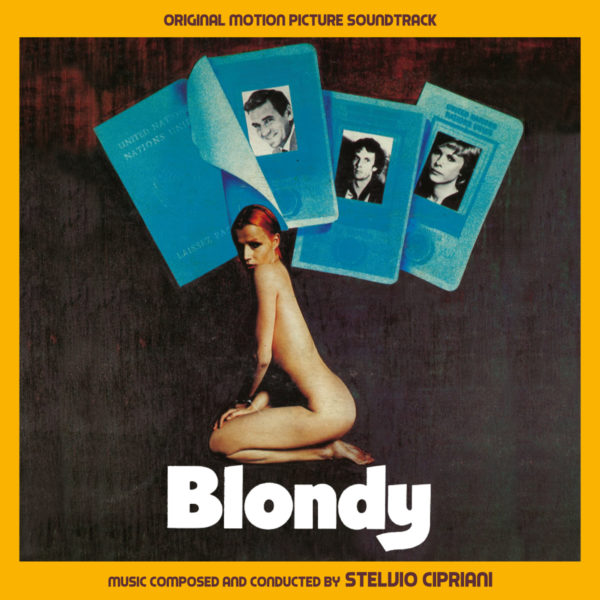 Quartet Records, in collaboration with Gruppo Sugar, present the CD premiere of erotically charged Stelvio Cipriani score for the French-Italian coproduction Blondy, starring Rod Taylor, Catherine Jourdan and Bibi Andersson, the film was released in the US under the misleading title Vortex which tried to rebrand the film as a science fiction thriller along the lines of The Andromeda Strain.

Based on the popular novel of Catherine Arley, Blondy tells the story of an UN expert who travels around the world holding lectures about biochemical warfare and nuclear power – but he makes the crucial mistake of putting his work in front of his wife.

Stelvio Cipriani’s score is a real delight, dedicated to the emotional aspects of the story as Catherine Jourdan embarks on a journey to infidelity. The heavenly siren-like voice is courtesy of Edda dell’Orso. On the other hand is given an international scope with excellent source music and exciting action cues highlighting the more action-packed half of the film. This is a close approximation of the classic ’60s espionage sound with a definite ’70s twist to it.

The soundtrack album was only released at his date in France on LP before; this CD premiere contains the identical original program. The 12-page full color booklet is richly illustrated, liner notes by Gergely Hubai discuss the film and the score.